The tag line for the race my brother and I ran today is “It’s a mucking good time.” 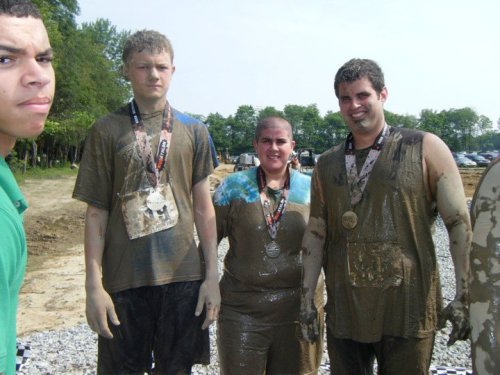 Sometimes tag lines match the event they’re publicizing and sometimes not. In this case, the motto matched clear up until we were waiting in line to get rinsed off. We were covered in muck that smelled a bit like pig shit, and then had to wait almost two hours for the Anderson Fire Department to hose us off. For some reason, when our group of four (Adam, Zack, Heather, a woman I met in the race, and I) got up to be hosed off, this peach-shirt-clad jack ass took over the hose because he didn’t think things were going fast enough. Instead of leaving the hose on stream, he opened it so it sprayed. We were still filthy when he declared, “That’s it. You’re finished. Get out.” Yeah, right. I am not getting in my car like this, even if I do have clean clothes to change into. I can’t even change into clean clothes because I don’t want to ruin two sets of clothes with pig-shit-mud! Seriously. I am hoping they ask for comments, because I have a comment. Get rid of Mr. Peach-Pink, Salmon Shirt, and figure out the post-race stuff! 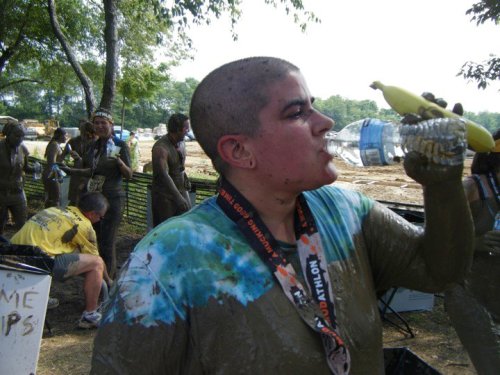 Post race is just as important as the rest of it, which was absolutely fantastic. One of the best times I have had in a long time, aside from the fact that I look like I’m packing a kid’s swim float ring under my muddy shirt in the picture below. Awesome. 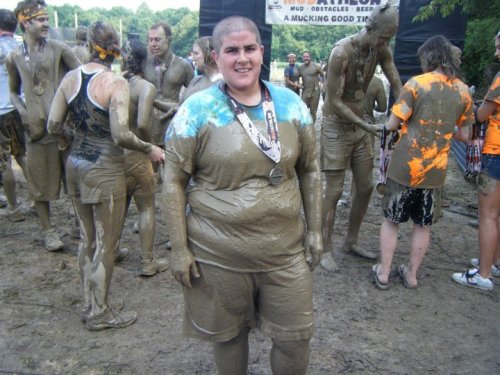 Okay, make that two swim float rings, situated one on top of the other. Doubly awesome. I have to say that for a fat, old kid, I hoisted myself over those obstacles with reckless abandon, and I’d do it again in a heartbeat. I wish I could do the one in Chicago in July, but I will be on my way to Nebraska!

On the way home from the race, we stopped at Hacienda in Anderson. Every time I eat there I get seriously bloated and tired, so I think they must put lard/animal fat in their beans and rice. And, I ordered my taco salad with no cheese, but it came with a huge dollop of sour cream. Tasty, but decidedly non-vegan. Their chips and salsa are probably the best I have ever had. I also had an new beer: Bohemia. I thought it was an excellent beer for a Mexican beer, but the beer advocate folks only give it a B-. Compared to all beer, I agree, but compared to Mexican beers only, I cannot support the B- grade. This beer blows out of the water every other Mexican beer I’ve had, which is most of them. My grandparents used to live 10-ish miles from Mexico in Harlingen, TX, so for my 21st birthday or maybe just for a birthday, my cousin Paula and I drank a variety of Mexican beers and drove our grandmother’s golf cart until the battery ran out. Grandma kept saying, “Don’t go too fast. You’ll get a speeding ticket.” We had to push the thing home.

I need to work on my dissertation and the stuff for the IEI. One will wait until after family vacation, the second will be done tomorrow and emailed before I leave on Monday. I just have to finish revising the assessments I have written, get the okay, and write the other two versions of each one. I am really enjoying the challenge of all of it.

For vacation, we are going to Cincinnati. It will be the first time we have been to the Great American Ball Park, and I am pretty stoked. They have veggie dogs. 🙂 We are stopping on the way in Dayton, OH, to eat breakfast at the Golden Nugget. I hope my dad orders the buckwheat pancakes, because he will love them! He has a thing for buckwheat. And, we are going on a Riverboat cruise, to Jungle Jim’s, and to the Cincinnati Zoo. I hate zoos, but I can tolerate it to spend time with the family doing other things we love. I am hoping to get in a couple of good morning runs while we are there, too. Marathon training officially begins on Tuesday! Woot.

On a totally unrelated note, I found a new writer/spiritual contemplative to think about. Her name is Pema Chodron, and I got turned on to her because of this quote: “If we learn to open our hearts, anyone, including the people who drive us crazy, can be our teacher.” I could use more advice like this. And then, it would help if I took it to heart.

Like Loading...
This entry was posted in Beer, Fat, Goals, IEI, Running, Vegetarian or Vegan. Bookmark the permalink.

One response to “It’s a Muddy Mess.”