5 Lakes 1 Day; Or How a Trip I Helped Plan for My Brother Changed My Life

On June 30, my brother and I swam in all five of the Great Lakes in about 13 hours. He turns 40 this year (and because it took me so long to finish this post, he’s actually been 40 for several weeks), and I wanted to help him celebrate that in a big way, since my 40th birthday was a bit disappointing and, along with some other events in my life, threw me into a two-year-ish long depression. I had no idea that this trip would, in fact, change my life as well!

We started by meeting at my Aunt Zoe and Uncle Fred’s house in Rapid City, MI, because we hadn’t seen them for a while and because it was close to where we thought our first swim would be. They live right near Lake Michigan and just an hour or so south of a place where many other say they’ve hopped into Lake Michigan as part of their 5 Lakes Challenge.

We woke up at about 5AM and got on the road shortly after, but when we got to the first swim sight, we were met with a closed sign and then the only other place we could find was a private beach. We hopped in there, but the experience wasn’t quite what we were hoping for.

Next we headed to Lake Superior at Brimley State Park on the Upper Peninsula of Michigan. The woman who was working in the office, did us the first solid of the day by letting us not pay, since we were only going to be in the park for about 20 minutes. I know, I know, the park is supported by donations. Trust me, I’ve given my fair share to various park’s departments over the years. When we got to the beach at Superior, we cautiously waded in, because we assumed that the water would be very cold. However, we were pleasntly surprised to find the water not excruciatingly cold, but quite pleasant. We splashed around for a bit, took some photos, and then hopped back in the car. 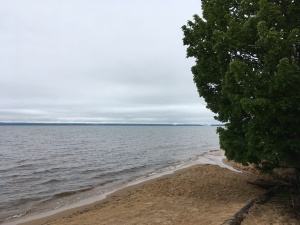 On our way south from our most northern point in Brimley, we decided that we wanted a real experience with Lake Michigan, instead of our illegal quick dip at the rich folks’ private beach. I remembered that I had passed miles of public beach along the northern shore of the lake as I passed through the day before on my way to my aunt and uncle’s house from Minnesota. All along US 2 in Moran, MI, you can access the water via stairs and boardwalks that line the coast. They are free and you just pull over to park and go down to the water. We reset our start clock for when we went into the water, and made a detour to one of these access points and revisted Lake Michigan. It was cold. The waves were big. We splashed around for a bit, took some photos, and then hopped back into the car.

Next up was Lake Huron, which we accessed at Cheboygan State Park. We were able just to drive into the beach, and didn’t pass a park office, so we still didn’t have to pay to access any of the lakes, which is awesome in my opinion, since you know I support many parks systems all the time. (By the way, if you use parks without helping them to stay operational, you are a colossal butthole. Just kidding about the butthole part, but it’s not very nice or thoughtful, so you shold maybe consider donating some money for the resources you’re using.) Huron was by far my least favorite lake. Even tough we were only about 30-40 miles away from where we’d dipped into Michigan, there were weird things floating in the water, it was weedy, and it was colder than Michigan. The park was beautiful and they had the best facilities of anywhere we stopped; I’d go back and vacation there to hike and visit Mackinac Island. We splashed around for a bit, took some photos, and then hopped back in the car.

Once we were finished at Cheboygan State Park and once we were finished with Michigan, we changed clothes to be dry for the long drive to Lake Erie in Ontario. On our way to Turkey Point Provincial Park, we stopped at Snowbelt Brewery in Gaylord, MI and had some pretzels and nachos. Health food. After lunch, we proceeded to drive to the north side of Lake Erie. We didn’t expect Erie  to be anything really, but it was clear, not incredibly cold, and the sand was beautifully pale in comparison to the other lakes we’d been in. Turkey Point was settled in a cute little lake town, and had some toilets for changing and a couple of little restaurants that were closed by the time we got there. We splashed around for a bit, took some photos, and then hopped back in the car. 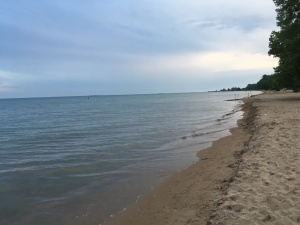 Finally, we were on our way to Lake Ontario, our last stop of the day. Our goal was to stop at a public park in Hamilton, but it was already getting dark, and by the time we found the park, not an easy task along the very dark, unlit coastline, we’d been on the road for 15 hours and been lake jumping for 13 hours. Our original goal was 12 hours, but we realized we’d have to flexible, given that we spent about an hour sitting in line trying to get into Canada.

By the time we got out of the car it was 10PM and we had to use our flashlights to guide us to the water. Lake Ontario was by far the coldest of all the laes we experienced that day, but I imagine that could change given the day. We splashed around for a bit, took some photos (in the dark), and then hopped back in the car. Okay, really, we went in and got back out as quickly as possible, because the water was leg numbingly cold. In fact, I originally wasn’t going to go under; I learned my lesson in Loch Ness about  very cold water nad being able to walk on a rocky shore with frozen feet. My brother told me that I’d regret it if I didn’t do it, and he’s right. I would’ve regretted it very much had I not gone back and gone under. There are no photos of this moment, because it was dark.

So, I said in the title that this trip changed my life, and it did. The beauty of the Lakes, the kindness, good humor, and genuine love of my brother for me and for fun, helped me to see that it’s okay to be content with what I have.

I can stop wishing for something else. I can be joyful about where I am, even if I thought I was going to be somewhere else.

I’ve been on a two- to three-year journey from depression and lots of self-doubt to a self-aware, confident, and generally joyful person.

I’ve spent a lot of time since turning 40 comparing myself to others, feeling sorry for myself that I am not teaching, and generally just being angry that I don’t have what I think I deserve.

This trip taught me that I will only ever be as joyful as I allow myself to be, that I have a very solid group of amazing people in my life who will support me in whatever I do (thanks to my parents and aunt and uncle for the Great Lakes blanket to celebrate the journey; I use it for camping, which I am planning to do much more frequently), and that I don’t need to compare myself to other people to see where I stack up.