Sometimes I wish I could be a shrinky-dink. Do you remember those pieces of plastic that we so painstakingly colored, put in the oven, and then spent the next 1 to 3 minutes praying for the damned thing not to curl up on itself? I mean I would love to shrink to twenty percent of my size and have for my only worry the desire not to curl up on myself.

Who was your favorite shrinky-dink? I think mine was Smurfette. I don’t really go for blondes as a rule. Generally, I prefer red heads like Strawberry Shortcake, but Smurfette was an exception. I think I loved her because she was the only woman in the village and had to put up with all those guys. I fantasized about her running away with Papa Smurf and leaving it all behind. Brainy would try to calculate a way to get her back. Vanity would stand there looking at himself in the mirror. Jokey would plant a bomb in their wedding present. Hefty would mis-build their house. But Smurfette would laugh and run her fingers through Papa’s beard. He would smile and they would open a bottle of champagne in celebration. 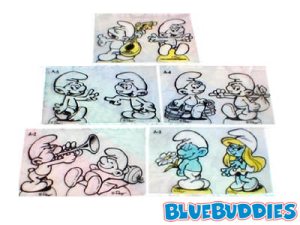 If my favorite wasn’t Smurfette, it was Strawberry Shortcake. I think this is more accurate. I would have given anything to know someone like Strawberry Shortcake when I was little. There was a girl I knew in high school who we called Strawberry, but that was entirely different. That story should be saved for its own entry. With a parental advisory.

Anyway, they have changed Strawberry Shortcake and her friends—not for the better. All their names are different, representing more healthy lifestyle choices, and they took away Plum Pudding. Why? My opinion: Plum Pudding was smart, loved cats and owls, and was possibly a little queer (Plum Pudding started out as a boy!).

I fantasized about her running away with Strawberry Shortcake. I think they would listen to Tracy Chapman’s Fast Car or the Indigo Girls’ Power of Two as they drove away sitting close to each other in a 1955 Chevy Truck. 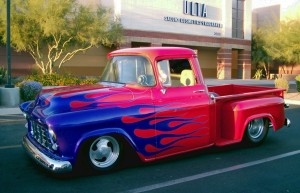 They would head down Route 66 to Los Angeles without looking back. They would wander up and down Venice Beach looking for shells. Maybe they would sleep on the beach or in the back of their truck in the parking lot under the Jim Morrison painted on the side of that building. Either way, Huckleberry Pie wasn’t part of the plan: