Let’s begin with Joseph. For some reason, whenever I hear of a meditation on Joseph of the Christmas story variety, I get a little pissed. In my mind, I wonder what else could possibly be said about a man who had so little to do withe actual Christmas story. As Sojourner Truth points outs about Jesus, “Where did your Christ come from? From God and a woman! Man had nothing to do with Him” (Ain’t I a Woman). For as little as Joseph appears to play a role in Christmas, the gospel of Matthew does spend the better portion of the first chapter giving Joseph’s lineage. I assume that means that even though Jesus isn’t technically Joseph’s son, Joseph is still important in the life of Jesus and in the eschatological timeline of the Christian church.

Despite my reluctance to recognize Joseph as someone worthy of lengthy discussions at Christmastime, and despite my desire to scream, “Can’t just one Christian holiday be about how God used a WOMAN?!?”, I have to admit that God sometimes goes to extreme measures to get me off my high horse. This time, though, a simple article did the trick. And, what’s even better is I found this short meditation by accident, via Twitter. Frank Viola writes in Remember Joseph: Rethinking Righteousness, “Today, I’d like to give Joseph his due. By my lights, Joseph was one of the most righteous men who ever lived.” That’s a pretty powerful statement. More righteous than Noah? More righteous than Job? More righteous than (fill in any person who is described in Jewish Scripture as blameless or righteous)? Really.

Viola continues by explaining Joseph’s righteousness like this, “I’m sure Joseph’s blood boiled when he heard that the woman who was betrothed to him in marriage was pregnant . . . and not by him. But because he was a righteous man, he showed mercy. He treated her as if he were in her own shoes and was guilty of what he had assumed she did.” Um, yeah. How many of us would’ve done what Joseph did? How many of us would stand beside someone who was in Mary’s shoes? Think about it really hard. Would you? Would I? Could we do it without patting ourselves on our backs or privately commenting that we are just doing it because that’s what a good Christian would do? Can we live as Viola describes Joseph? He writes “It is to react like Jesus, living void of self-righteousness.” This is the part of this meditation I loved. Viola reminds us to be vigilant in our dealings with others, because our own character is really what God is testing and proving. This holiday season can I behave this way? Can I live void of self-righteousness?

I initiated my hookah today. I used molasses tobacco, and spent about half an hour listening to Christmas music, contemplating life, and smoking shisha. I love being Greek, and I need to go to Greece sometime in order to experience where I come from. THe only drawback to going there is that I’m afraid I won’t want to come back!

I took the dogs for about a two-mile walk this morning, and when I got home I realized the reason I love breaks and summer is the ability to live slowly. I got up at 7:30 AM. walked the dogs around 8 AM, and made breakfast around 9 AM. This is the way my life is supposed to go. Slow, easy mornings. Now it’s noon and I have already exercised, made food from scratch, done laundry, relaxed, socialized via Twitter and Facebook, and written more than I have on any day since school started. Come to me summer, and don’t fail me Winter Break! On break, it’s all about the victuals.

Delicious vegan Egg Nog Waffles (substitute ground flax seed and water for the eggs) I made for breakfast! Yummy. 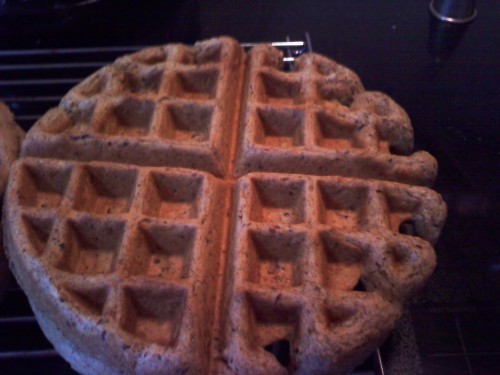 And the delicious dish I am calling Penne and Faux Sho Cheese that I made for lunch. 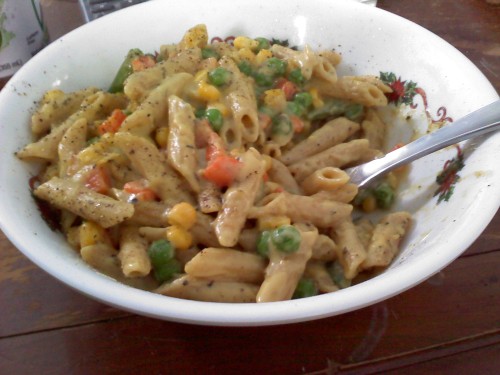 What do you have to say about this post? Cancel reply