More Things I’ve Eaten, and Some Cider. Sports. The Light of the World. Opening Day.

I don’t want to turn into one of those people who only posts pictures of the food they eat, writing endlessly about how amazing their cooking is and about how fantastic the food they eat is, but I love food, I love cooking it, and I love eating it, so it only seems right to post pictures of my first love. Lots of pictures. I promise, though, that I won’t brag (too much) about my cooking skills.

Along with my love of food, my second love used to be beer, but it doesn’t make much sense to me to avoid grain products all week long, just to inundate my body with them on weekends. In fact, many people who follow a paleo or primal lifestyle eschew alcohol all together. Instead of completely abstaining, I’ve switched to ciders, but the sad part of this scenario is that there aren’t nearly as many ciders available to try as there are beers, especially in the Midwest. My brother and I are hoping to visit some cider breweries this summer, so I’ll make sure to keep you in the loop about that. 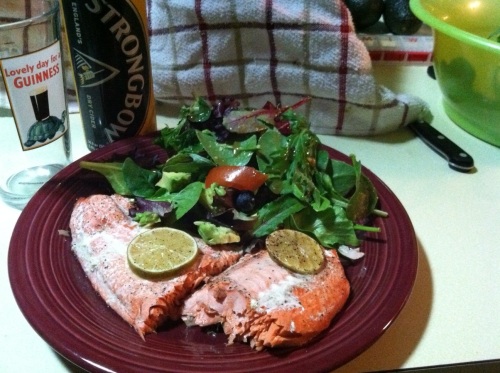 The more time I spend playing or participating in other sports, the more I agree with the idea that physical conditioning just prepares us to play more and better. I know myself well enough to know that I will never be a fast runner. In fact, I’ll probably never finish in the top two thirds of any race I run. Likely, I’ll finish in the last quarter, if not in last place, but I don’t care. I don’t care because I don’t run to be competitive; I run for the fun of it. I don’t swim to be competitive; I swim for the fun of it. I love the sports that require lots of stamina and that make my body sore and achy the next day because I’ve worked hard to have fun and to finish. I consider swimming and running to be the building blocks for every other sport. (I’d consider cycling to fill this purpose, too, but it’s not summer and I don’t generally ride my bike when it freezes my face.) These sports exist to prepare our bodies for more.

For example, I realized last night that I signed up for two races that I probably won’t finish, because they’ll cut the race off before I will make it around the course the second time. I don’t care. I’ll just keep running and cross the line after the awards ceremony, but at least I will have finished. I didn’t look at the times before I signed up and they didn’t list a cutoff time, but last years times are posted now, and I will run it in about 15 to 20 minutes longer than the longest time listed. I assume this is because lolly-gagging, fat, barefoot or Vibram-clad, pushing-40s, running-for-fun women don’t generally sign up for 15K trail runs. I just hope my time doesn’t go down as a DNF because it took me too long to cross the line. I’ll just have to time myself with my watch and be unofficially proud of myself for finishing.

You see swimming and running are sports I play to finish, but racquetball, disc golf, basketball and those types of games are sports I play to be competitive. I don’t by any stretch of the imagination mean that I am exceptionally good at any of these sports, but I love to be competitive in them. I play hard. I win hard. Or, I lose hard, but I always have fun. I played racquetball with my friends Celeste and Sarah yesterday and had a blast! To me, the grueling workouts of running and swimming serve only to prepare my body for playing hard and having fun, not that I don’t have fun swimming or running—if I didn’t, I wouldn’t do them—but I don’t swim or run to play or compete. On second thought, maybe that’s why I am so drawn to trail running, because it’s fun, and so much more like playing than road racing could ever be?!?

Speaking of playing, baseball’s opening day is just around the corner! Go REDS! Their home opener is April 5 against the Florida Marlins. I hope to make it to several games this year, but we’ll see how the funding works out. If anyone wants to donate Red’s season tickets to my summer fun basket, let me know. I’d appreciate the dugout box, or the infield box seats. They’re reasonably priced. Ha!

The Light of the World

I have forgotten that I am supposed to be the light of the world. Instead, I’ve been spending a lot of time being the opposite of the light, repeatedly putting myself under a bowl. I’ve been the harbinger of pessimism, sadness, and anger. Lots of anger. How can I be the light while I am being angry? Matt showed us a video about Bob Goff, and in it, Goff said you can’t be angry if you keep your palms up. It’s easy to get angry when your fists are clenched or your hands are facing down, but it’s very difficult to get angry when your palms are facing up. Yet another example of the ways in which God designs our bodies to worship and not to harm: the physicality of our bodies guides the emotionality. I need to remember that.

My challenge to myself is to remember that I am where I am for a purpose. I need to ask myself everyday, “How is it that you are going to let God use you today?” And I need to make sure I face my palms up when I am meeting with colleagues. Does this mean I will do it all right? No. I am sure it doesn’t. But does it mean I will be a little more intentional about trying to be the light of the world, about trying to show God’s love to others? Yes. I certainly hope it does.